â€œDeus Ex: Mankind Divided is a better shooter than most actual shooters.â€ - 4.5/5 - GamesRadar+

â€œBuy the heck out of this game.â€ - Ars Technica UK 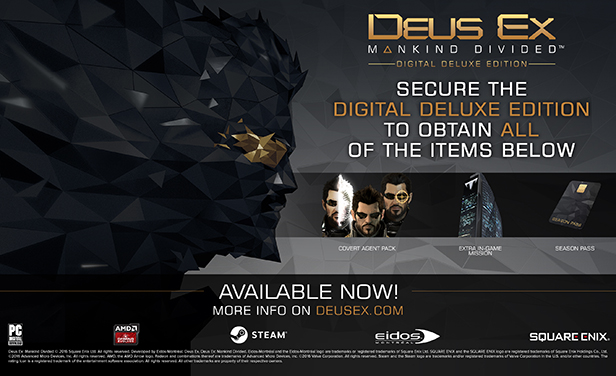 Secure the Digital Deluxe edition now to gain access to all of the following items:

The Deus Ex: Mankind Divided - Season Pass, which is composed of Narrative DLCs and in-game items, is loaded with content that will help to further flesh out the lore of the Deus Ex Universe. Here is what it contains:

The year is 2029, and mechanically augmented humans have now been deemed outcasts, living a life of complete and total segregation from the rest of society.

Now an experienced covert operative, Adam Jensen is forced to operate in a world that has grown to despise his kind. Armed with a new arsenal of state-of-the-art weapons and augmentations, he must choose the right approach, along with who to trust, in order to unravel a vast worldwide conspiracy.